Today’s Sail Away Story post is our first edition  of  “A little birdy told me…” in which we will feature guest writers sharing about their favorite children’s books and schools from around the world.

Meet today’s “little bird,” Christine Banas.  The words that come to mind when I think of Christine are writer, mother and grandmother, early childhood education specialist for children with different capacities, photographer, and world traveler.

As we hug the last days of summer (the first day of Autumn is September 22), Christine  highlights a childhood classic of summer in the USA.

Summer! Such a rich word conjuring up images ranging from wild splashing in a rolling surf, lying on a worn dock as the sun bakes you dry, to ice cream dripping down your arms as you try to catch its deliciousness before it all melts. Long days and short nights signal that special time of freedom especially in the northern part of the United States. Wintry days eke into fall and spring making it a longer season than the calendar would have you believe. As a result, I found summers in Maine to be exceptionally precious. The warm sun when it finally brightened the countryside christened the blueberry bushes with sweetness beyond words. My children and I would spend early mornings picking the dewy blue orbs that my mother-in-law would turn into muffins, pies, and jam.

When the memory of summer was buried under a foot of snow, my children loved reading the book, Blueberries for Sal written and illustrated by Robert McCloskey. It reminded us of an activity we shared and opened us up to a story about the love of mothers and their child.

Regional Focus: Maine, a state in the United States

This timeless story, though probably set in the late 1940’s in Maine, takes us on a blueberry picking trip with Little Sal and her mother. They set off for Blueberry Hill with their metal pails to pick berries for mother to can for the winter. Little Sal picks a few berries and puts them in her pail. Then she picks three more berries but she eats them before they make their kuplink, kuplank, kuplunk noise in the pail. Mother works her way up the hill but Sal’s little legs are getting tired. She eats all of her berries and then reaches her hand into mother’s pail and helps herself. Mother suggests Sal go collect her own berries so she plops down in a clump of bushes and proceeds to eat the berries.

At the same time, a mother bear and Little Bear are working their way up the opposite side of the hill. They are preparing for winter by eating as many berries as they can so they get big and strong to make it through the winter. Little Bear would lag behind his mother and then have to hustle to catch up to her. Finally, he tires and sits down in a clump of bushes and, proceeds to eat berries.

Meanwhile, Little Sal has finished eating and looks for her mother. Instead, she finds Little Bear’s mother and begins walking behind her. Simultaneously Little Bear has lost his mother as well and begins walking behind Little Sal’s mother. Eventually, both mothers turn around and realize they have the wrong little ones following them! All ends well with the mothers and their little ones reunited and everyone has gathered more than enough blueberries. 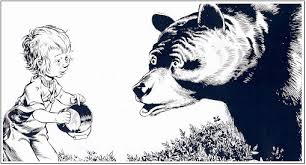